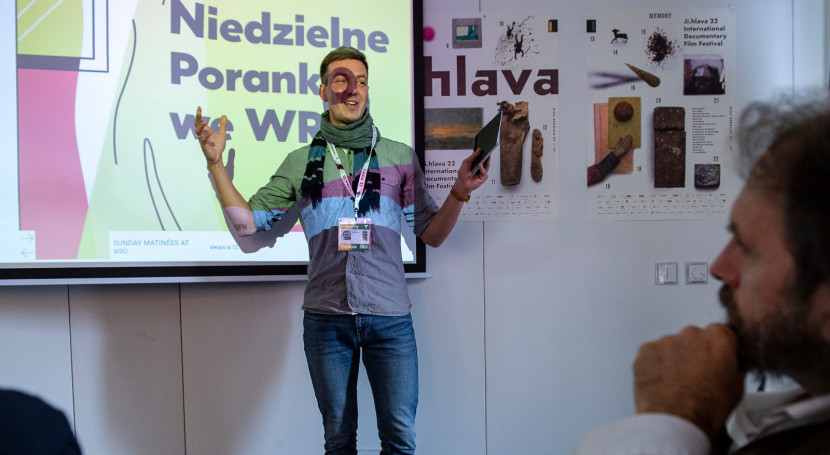 Conference Fascinations 2018 follows up on three previous editions – Conference Fascinations 2015 that brought together and introduced representatives of major experimental film distribution companies from all over the world, the Conference’s 2016 edition focusing on the curatorship aspect in relation to specialised festivals and the presentation and ways of providing, evaluating and presenting works in gallery spaces, and last year’s programme where film industry and gallery representatives discussed the institutional-commercial aspect of presentation and dissemination of this type of works in relation to seeking and promoting new talents, with one of the debates dedicated to art in VR environment. The fourth annual conference will focus on methods of distribution and presentation of works created using various technologies and on varied media – from film reel to interactive films and works of art in VR environment. The topic is approached from a curator’s technological-production and educational perspective.

In 2015, notable international distributors became acquainted with the Czech experimental scene, and in 2016 an introduction was made about the historical era of totalitarian communist regime and the underground and experimental cinema in Eastern Europe. In 2017, gallerists, distributors and festival programmers got to know experimental production of the Balkans from the same period. This year’s screenings will be dedicated to experimental works in the Baltic countries during the Communist regime.

The conference will be held as part of the 22nd edition of the Ji.hlava IDFF (October 25 to 30, 2018) with its main topics including: experimental film distribution, presentation and conservation possibilities and various channels of reaching out and making these works available to curators and audiences.

Representatives of distribution companies, festivals and galleries will also be presented with Czech experimental documentaries (Exprmntl.cz competition section) as well as a special programme of experimental films from a given territory. The Ji.hlava IDFF has become the first platform enabling a systematic presentation of Czech experimental films (notably works referring to reality and including documentary features), at the same time continuously focusing on Eastern European cinema; the festival’s ambition is to promote Czech and Eastern European films internationally and to facilitate collaboration between filmmakers and distributors, galleries and festivals and those active abroad.

11.30 AM – 12.30 PM | Discussion panel I.
Curatorship aspect: How do galleries and festivals select VR/AR projects for presentation, which are their main selection criteria? Do galleries that also present the film do so exclusively in its digitalised form (example of the fabulous film museum EYE Netherlands) or do they continue to also present the film version? How are the works selected and what possibilities do authors have to reach out to them and offer their works, and how do they do so?

2.00 PM – 3.00 PM | Discussion panel II.
Presentation-technological-organisational aspect: How is film present, as opposed to VR/AR? What is specific for gallery display versus festival presentation? Various examples and description of their installation (creative aspect of presentation), technological solution and visitor/viewer friendliness. How costly are these installations and how difficult is it to arrange technical equipment? What maintenance does such presentation require?

3 PM – 4 PM | Discussion panel III.
Film labs: There are associations in various countries across continents that focus on creative work with film material, rent filming equipment, teach how to use the film in shooting, development and editing, and cater to the distirbution of projects that are made using film. How do these film labs work, what do they do, how are they financed? And above all: what are today’s possibilities of presentation of films made on film? How can films be presented in galleries (what practices from the past are transferrable and what practices have recently emerged)?

16.20 – 17.20 | Discussion panel IV.
Film, visual arts, audio-visual installations and interactive installations in VR or in augmented reality: good practices, how can this varied content be presented in galleries and at film festivals? How can we create environment where such works can be enjoyed by multiple viewers? How to approach installations including also sensory experience or staging or the performative aspect in the “external” world of the work (a noticeable trend in the last year)? What are the current trends and development in the field of VR/AR art installations and what preparations are required on the part of festivals/galleries (in organisational, curatorship, and technological terms)? What is the typical economic model of presenting this kind of works (is it different for galleries and site-specific presentations as opposed to film festivals).

10.00 AM – 12.00 noon | One-to-One meetings
» Presentation of experimental works of authors from Eastern Europe to individual distributors, festivals and gallerists directly at one-to-one meetings
» Each of the 10 tutors provide 3 x 15-minute consultations to authors of experimental films, video-art and installations
» This year, they will have the opportunity to meet with representatives of film labs and VR experts (working with film and galleries)