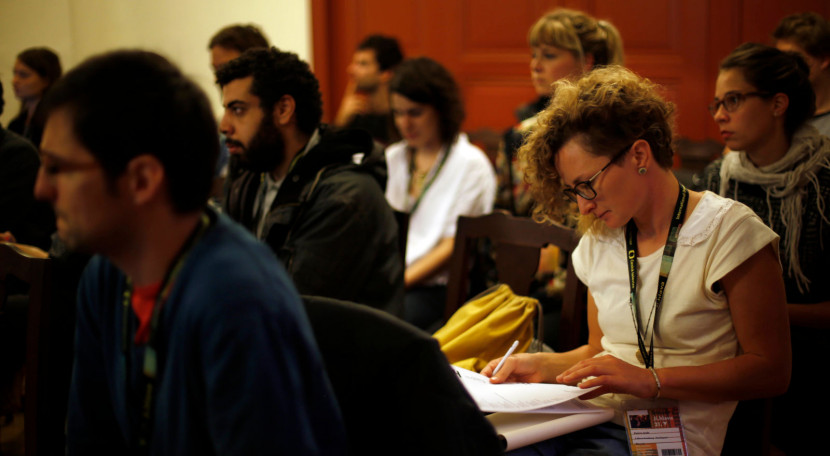 Fred Kelemen studied painting, music, philosophy, science of religions and theatre sciences and worked in different theatres as a director's assistant before he began his studies at the German Film & TV Academy Berlin in 1989. Since that time, he has made a number of films and videos as director (Sarajevo Song of Woe (2016), Fallen (2005), Nightfall (1999), Frost (1998), Fate (1994), Kalyi (1993)) and collaborated as Director of Photography and Cameraman with several film directors like for example Béla Tarr, The Turin Horse (2011), The Man from London (2007) and Journey to the Plain (1995). In 2000 and 2001 he directed several plays at different theatres in Germany. Since 1995 he is working as a guest lecturer at the Centre of Cinematographic Studies of Catalania in Barcelona/Spain, at the School of Visual Arts in Geneva/Switzerland, at the Latvian Cultural Academy in Riga, at the Tel Aviv University, at the Film and TV Academy Berlin, at the Ecole des Beaux Arts in Lyon etc.

Anja Salomonowitz is a Vienna-based filmmaker. In her films she has developed a visual language that combines elements of documentary film-making, classical narrative and challenges to politics and society. Her films have gained international recognition and won numerous film awards; they have also been cited as references in literature on documentary film-making. In 2014, she was the chairlady of dok.at, the Austrian Documentary Film Alliance, and in 2016 she was chairlady of the Austrian Directors Association. Anja Salomonowitz has three sons. She studied film in Vienna and Berlin, honed her craft as an assistant to Ulrich Seidl and elsewhere. Last year, 2016, she staged the theatre piece The boy has to be circumcised in Vienna. She frequently gives lectures on the topic of artistic documentary film, for example at the Aalto University in Helsinki (Department for Film and Television), at the Academy of Fine Arts Vienna.