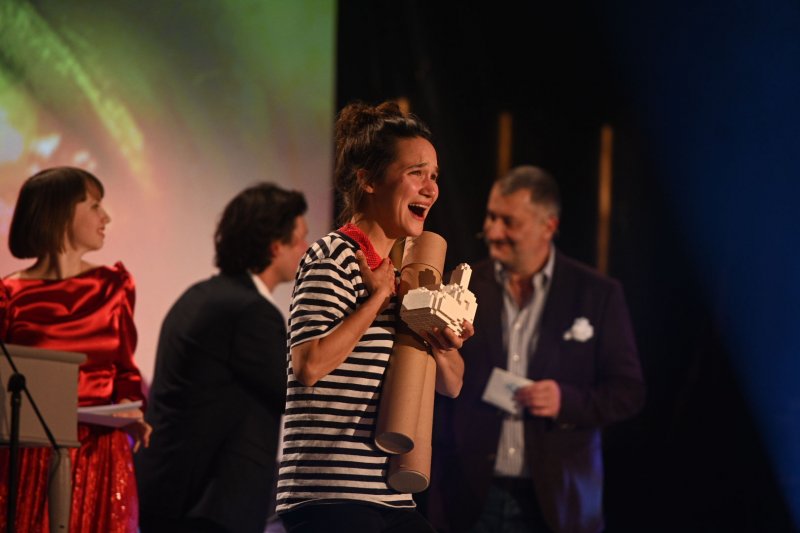 Opus Bonum is a competition section for the documentary films from all around the world, with the price for the Best World Documentary Film.

Jury statement:
For the warmth, the intuition, the trust, the courage and generosity that are holding together a film that keeps on reafirming the power of the innocent gaze while echoing the voices of the old masters.

Jury statement:
For the inteligent and inspired use of the cinematographic device in her search for the ineffable.

Between the Seas is a competition section for the countries and nations of Central and Eastern Europe, including their historical, political, and cultural interrelationships.

Jury statement:
This is an essential film that needs to be seen around the world. A math teacher working on the fringes of a failing educational system becomes a transformative mentor for a group of young students. Through his dedicated tuition, these young people discover the most important lesson in life: you must fall "tragically in love with what you do". For its celebration of the unconventional, for its embrace of messiness, imagination and passion in teaching Between the Seas award goes to TEACH.

BETWEEN THE SEAS: STUDENT FILM COMPETITION

The most significant student films from the Eastern and Central Europe.

Jury statement:
Starting off as a geographical and cultural bicycle road trip through France, on the trail of a Polish war time writer from the 1940s, the real journey of this film becomes a witty exploration of the dynamics of a relationship. For its free-flowing, unpredictable style, which subverts the conventional narrative of a masculine adventure, and for its wry, open-ended enquiry into the nature of historical trauma and memory

→ The winner of student competition will receive an award of 2,000 USD (in cooperation with the Current Time TV)

Jury statement:
Using minimal cinematic means, in a series of intense and poignant sequences, this film reveals the moral dimension of the global environmental crisis and our inescapable need to confront it. In the course of four seasons we witness the cycle of a cemetery of human consumption and overproduction.

Czech Joy is not only a prestigious competition for the best Czech documentary, but also a celebration of the diverse range of new topics and the adventurous spirit of cinematic epxression.

Jury statement:
We appreciate the lightness, nonviolence and concentration used by the author to portray a strong human story of a suffering person and to get as close as possible without disturbing formal effects and pathos.

Jury statement:
An unobtrusive insight into the lives of outsiders attached to the past and a place that, despite dramatic changes, is still their home. The film moderately examines the basic questions of human being in an upside-down landscape. It is a metaphor of a world that is falling apart and that we are no longer able to understand.

→ The authors of the film awarded with special mention will receive camera NIKON, Z series

Jury statement:
The film The Kings of Šumava objectively deals with the issue of heroism in a relatively recent time, greatly important to young people. The opinion of the hero’s actions is distorted by the contemporary ideology and generally perceived in a negative way. The document states this fact and subsequently offers the views of both the parties dealt with to the same extent, so the document fulfils its primary function, i.e. it is an objective testimony. Thus, it becomes a great teaching material. The artistic and information value is of the same quality. The realistically conceived animation, which is artistically well done, depicts memories that can no longer be captured and the pictorial component of the film portrays the atmosphere of the time.

Jury statement:
Several shorter documentaries, all made by young filmmakers, have a different position in the list of films. These documentaries should be rated differently than longer formats and they also deserve a special award. Of these, the 11-minute Aparatgeist, which has the potential to evoke various responses, was the most appealing. Its well-styled execution intensifies the stories from smartphones, whose individuality and apparent incoherence perfectly illustrates the issue of disseminating information. The topic requires taking a stand, but this was not even the director’s concern. Her relaxed commentary on the film after the screening evidently showed a fresh talent.

Fascinations is a large factory for experimental filmmaking that takes films based on reality and strips them of all that weighs them down, thus significantly expanding the possibilities of filmic expression.

Jury statement:
A stunning short that unravels and rediscovers the magic and the power of cinema through a personal new tecnique.

Exprmntl.cz is a competition survey of the latest Czech experimental films that touch upon reality and never cease in their search for new ways of expressing reality through classical and digital film.

Jury statement:
For its inventive and fresh approach and critic to the yet to be exhausted subject matter of how capitalism infiltrates and conditions everyday life. Combining genres and styles from advertisement to videoclip, from documentary to doodling graphics, Morena Rex is an ironic attack to the patriarchal financial institutions and their impacts on societies.

→ The winner will receive an award of 50,000 CZK (in cooperation with the Art Zone 8smička)

Jury statement:
We decided to give a special mention to Abstract Horror by Franz Milec for its outstanding imagery, otherworldly music and sound design. Based on an interview with one of the most controversial thinker of our times this science-fiction journey collapses motion graphics -3d imagery, in an innovative and uncanny way.

First Lights focuses on the first great works of beginning documentary filmmakers. Thee selected films offer a different view, allowing us to answer questions related to the history of documentary film, its changing topics and styles.

For its powerful ability to provoke a visceral response. For its capacity to elicit the violence it explores. This film succeeds in translating content into form and experience. This film focuses on the collective silence surrounding brutal historical crimes and the fragmentation of history.

Jury statement:
The student jury awards the film Aphasia. It especially appreciated its creative grasp of form as well as the advanced essayist style, forcing the viewer to rethink the boundaries of their past thinking and perception. Based on an analysis of collective and individual inequalities, it makes people accept responsibility for how they have behaved and will continue to behave.

Short Joy is a selection of documentary shorts, with the price for the Best Short Documentary Film.

A TESTIMONY ON POLITICS

A Testimony on Politics creates space in which voices and visions overlap with images and rhythms, the urgency of the content with formal intransigence. A competition section screening this year’s most important political documentaries.

Jury statement:
The Cave: “Why don't they stay and help out there?” were often the words said by opponents of receiving refugees during the war in Syria. Firas Fayyad’s documentary “The Cave” shows the heroism of the doctors and medical staff who worked in the surrounded and bombed town of Ghouta. They had saved thousands of lives in their underground hospital, although they had limited equipment and had to face distrust and gender prejudice. Despite their high commitment, they were eventually forced to leave the town, facing an ongoing military campaign. The documentary shows human dedication and solidarity that cannot be broken even by the tragedy of war.

A TESTIMONY ON KNOWLEDGE

A Testimony on Knowledge is a competition section offering a new definition of scientific documentary. The boundaries of human knowledge, the boundaries of the portrayable – and the possibilities of crossing them.

Jury statement:
The film shows that even scientific photos of the planet Mars which we might percieve as a pure representation of reality are actually reshaping the reality into something we understand and expect. The extreme example of scientific picturing of an object which we have no direct experince with makes the audience ask: How are the pictures from all the current problems on the Earth reshaped by our expectations and ability to understand.

A TESTIMONY ON NATURE

A Testimony on Nature is a competition section featuring this year’s documentaries that hold conversations on the creation and destruction, on threats and challenges, about man as part of and as a mortal enemy of nature, all through the refined medium of film.

Jury statement:
This film by Edward Burtynsky, Jennifer Baichwal and Nicholas de Pencier puts a human face on global destruction. Humans are affecting nearly all forms of life on the planet. With stunning visual imagery, stories from the people, and with the amazing animals that share this world with us, the filmmakers explain the complexity of our environment and warn about what could be a mass extinction. It’s as fast and brutal as the change that overwhelms is. A cry for help. A call for change.

Jury statement:
Beautifully shot on 16mm, this is a powerful film that captures an in-between moment, at the end of adolescence, a play of youth and light located in a rural place, in an unrecognized country. A very loving view on a dynamic group focused around an unusual and unforgettable female character

Jury statement:
Through mystical images and enigmatic protagonists the filmmaker suggests an extreme connection between human faith and fortune, nature and the weather. Often Lynchian, the director's filmmaking achieves a true thriller as the title suggests.

Jury statement:
To a poetic film that is a compelling combination of sound, image and tone. In dealing with the effects of a tragic event whose resonances are still felt today, the film explores ideas of absence and loss while also being a paean to the power of music, the resiliency of the human spirit, the need to survive and the refusal to forget. A remarkable technical achievement, an embodiment of brave filmmaking and symbolic exploration of hope amongst destruction.

Jury statement:
The filmmakers demonstrated extraordinary bravery and presence of mind in keeping the camera rolling in the face of terrible personal tragedy. For its fearless honesty, the jury wish to give the Special Mention to Waiting for a Miracle by Aljona Surzhikova.