The 26th Ji.hlava IDFF – both live and online part – is now over. The festival reached 90,000 viewers

The twenty-sixth edition of the Ji.hlava IDFF is now over. The online Ji.hlava was held for two weeks, following the live edition. It was for the second time that the festival was held both live and online, and it featured 376 films, 102 Q&As and 24 Inspiration Forum discussions. Over 86,000 people viewed films shown by the Ji.hlava IDFF, more than 36,000 directly in cinemas and almost 50,000 online. Ji.hlava attracted 5,588 accredited visitors this year.

The award granted by online audience went to Black Czechs, a film created by Czech director Martin Müller about the adult life of Namibian children who had been growing up in Czechoslovakia but were forcibly moved back to Africa after the Velvet Revolution. The most viewed film of the online section was Humans by Kateř Tureček, an autobiographical portrait that is also a probe into the lives and problems of non-binary and transgender people.

“In recent years, our world has undergone a real test. Together with the entire Ji.hlava team we are happy that Ji.hlava has passed this test. Thanks to the pandemic, we have incorporated digital innovation into the festival, expanding Ji.hlava with its online part as well as using new technologies to enhance the film experience in cinemas. We also introduced new possibilities with online features for the Inspiration Forum or the Ji.hlava for Kids programme dedicated to the smallest audience,” says Marek Hovorka, the director of Ji.hlava IDFF.

“We will continue to expand the identity of both the festival parts in the future. Before the pandemic, there was only one Ji.hlava, and now we have two. This year has made it clear that this is not just a temporary situation. After twenty-six years, Ji.hlava still brings a bold film programme to our awesome audiences. This year’s success is a commitment for the years to come. We will do everything we can to expand the number of festival cinemas and continue to improve the audience experience – in Jihlava and online,” adds Marek Hovorka.

5,588 people got accredited for this year’s edition of the Ji.hlava IDFF, including over 1,300 film professionals. Attendance of the live part of the festival exceeded 36,000 visitors and Ji.hlava Online recorded more than 29,000 film views. When converted by a factor of 1.7 (used by streaming services to determine the number of viewers), we arrive at almost 50,000 viewers online.

Of the 376 films screened, 97 were shown in their world premiere, 23 in European premiere and 37 in international premiere. The films competed in six sections. The screenings were held in nine cinemas in Jihlava and Třešť. The programme offered 102 Q&As and 24 discussions as part of the Inspiration Forum. The online part of the festival included 14 streamed evening screenings accompanied by an introduction and a Q&As with the filmmakers.

The Ji.hlava Online Audience Award, held under the auspices of Aktuálně.cz news portal, went to the Czech film Black Czechs, directed by Martin Müller, about the adult life of Namibian children who had been growing up in Czechoslovakia under a special socialist education programme but were forcibly resettled back to Africa after the Velvet Revolution – without having completed their primary education or language and psychological training.

The second highest rated film was a meditative documentary by director Petr Michal, Found by the One She Seeks, which follows the life of Czech translator Anna Kareninová. The film took home also the award for best cinematography from the live part of the Ji.hlava IDFF.

Third came The Shift by Slovak director Jaro Vojtek. The film is a social probe into the lives of three characters whose family relationships fall apart due to their work abroad.

Humans got the most views

The most viewed film of this year's Ji.hlava Online was Humans, directed by Kateř Tureček. It is a distinctive autobiographical portrait and a probe into the lives and problems of non-binary and transgender people.

The second most viewed film was Black Czechs by Martin Müller.

Among the three films of Ji.hlava Online that attracted the most views is also the Ji.hlava’s Best Czech Film – The Kapr Code by Lucie Králová – a documentary opera about Jan Kapr, who was first a protégé of the Communist regime, but whose work was banned during the normalization period.

The twelfth edition of the Inspiration Forum also celebrated a success. In addition to the events in Ukraine, it focused on society moving online, the limits of economic growth and its alternatives, and freedoms that are often still only on paper. Over the course of five days, the Inspiration Forum presented 24 programmes and debates, which were attended in Ji.hlava or online by nearly 80 guests from around the world.

“In the five days of this year's Inspiration Forum, the theme of emancipation resonated across many debates, regardless of their focus. My main takeaway is that the dominant frameworks of power, opportunity, distribution of resources and rights are being challenged and suit fewer and fewer people. Obviously, there have been too many missed opportunities for different types of individuals and groups to find their place in society. In the context of emancipation, the words ‘care’ and ‘solidarity’ resounded during the discussions, because hardly anyone can achieve emancipation by themselves. The loudest voices are those of the younger generation. Differently, but all the more urgently, we heard about emancipation from the mouths of the guests from Ukraine,” says Tereza Swadoschová, the head and programmer of the Inspiration Forum.

The Inspiration Forum’s discussions were attended live by over 2,500 visitors, and viewed by more than 12,000 viewers online. You can watch the discussions here.

Ji.hlava for Kids also opened its doors to teenagers

The fifth edition of the Ji.hlava for Kids event welcomed 642 children, with a total of more than 5,000 participants. The six-day programme for children included 19 workshops and seminars, 3 theatre performances, 3 concerts, several screenings and other accompanying programmes. 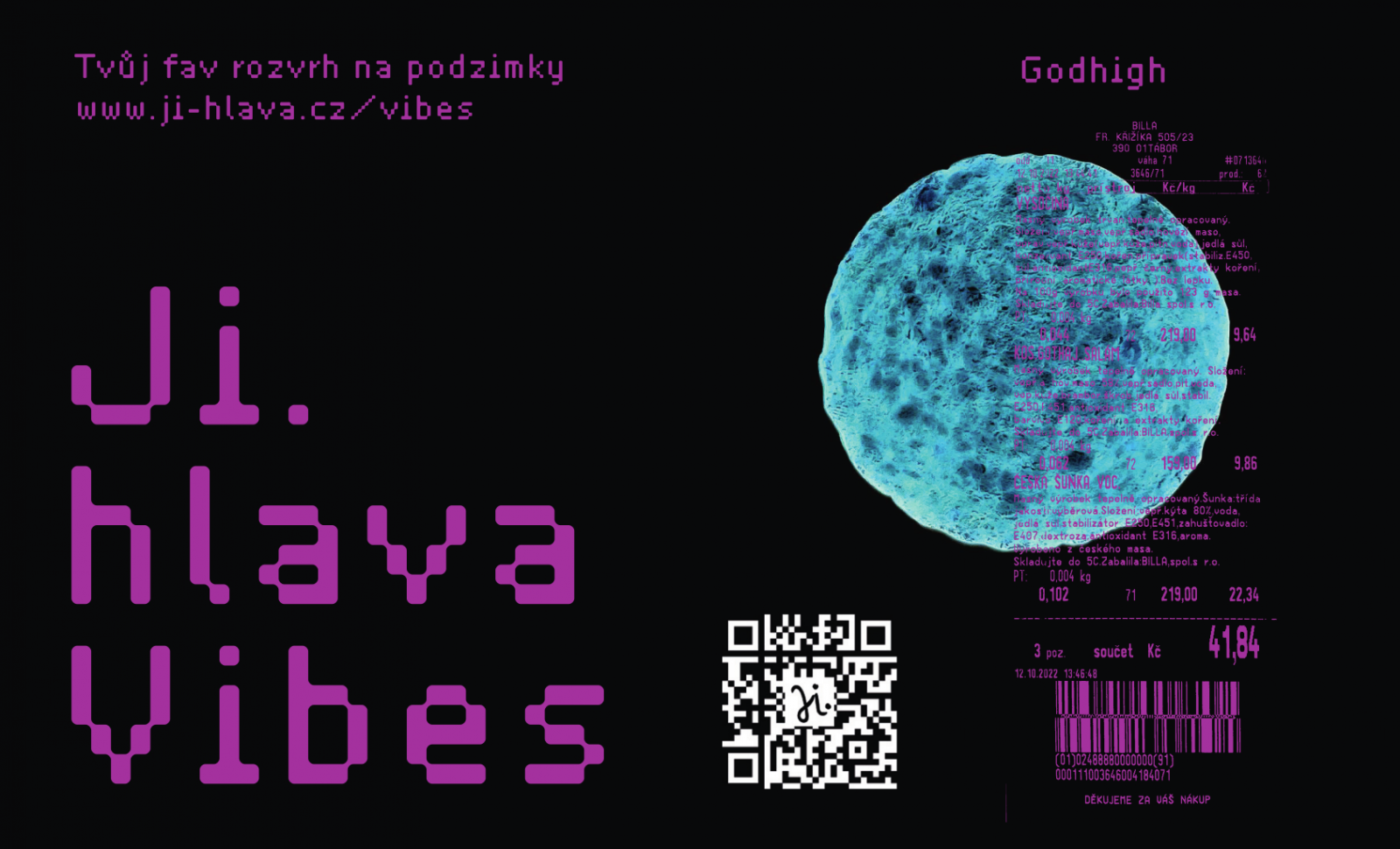 A novelty of this year’s edition was the Ji.hlava Vibes cross-sectional programme for high school students aged 15 and above. “This year's novelty, Ji.hlava Vibes, has met with interest not only from Jihlava’s high school students. We selected a programme from across film sections, concerts, theatres, workshops, VR, game zone and Inspiration Forum and introduced Ji.hlava as an attractive place to explore the world. We want to motivate this emerging generation to reflect on society, to engage in wider public debate and to test new forms of self-education," says Šimon Bauer, Director of the JIhlava-based Centre for Documentary Film.

This year's festival spot was created by Italian director Roberto Minervini, the festival awards were designed for the second time by visual artist Federico Díaz.

Dozens of activities also took place within the industry programme for film professionals. This year it reached more than 1,300 film professionals from all over the world. “Again this year, the programme was highly popular and I believe that thanks to the meetings at this year’s Ji.hlava, interesting projects will be created,” says Jarmila Outratová, head of the Ji.hlav industry programme.

This year saw the second edition of the international Ji.hlava New Visions forum. 16 documentary projects from Europe and 10 from the USA were presented and 7 of them won prizes. Dozens more projects participated in the Ji.hlava New Visions market. The festival included a meeting of nearly 50 representatives of international film festivals, who exchanged experiences and discussed the topic of ethics in festival programming. For the seventh time, the Ji.hlava Academy programme took place – filmmakers produced film poems over the course of three days, which the audience could watch during the festival. The Matchmaking Accelerator was also a success, aiming to connect filmmakers and producers with festival organisers, distributors and co-producers. In total, this year, the Ji.hlava IDFF helped to organise more than 500 working meetings, over 400 of which took place directly in Ji.hlava and 112 of which took place online.

This year, a full-day Conference on Ethics in Documentary Film took place for the first time. Its theme was power and power relations in documentary cinema. The purpose of the conference was to spark a dialogue on important ethical issues and to open up a new space for discussion. The conference was held in conjunction with Masaryk University in Brno.

The 26th Ji.hlava International Documentary Film Festival has been officially launched and its opening evening featured the presentation of the first festival awards. The best Short Joy section film is selected by the online viewers of DAFilms.com, this year going to Blue Bed by Belgian director Lize Cuveele. This year, Ji.hlava presents almost four hundred films and the festival will continue until October 30. Today, the 26th Ji.hlava IDFF was officially kicked off by 8th Day of the War by Ukrainian director Oksana Moiseniuk. With a diary-like immediacy, the film captures the outbreak of the Russian aggression through the eyes of Ukrainians in the Czech Republic. The author follows eight Ukrainian people working in the Czech Republic. They all continue do their work tasks, but their minds are set on the events taking place in Ukraine as they try to help in any way they can. Ji.hlava handed out the first festival awards. The award for the best short film was announced, based on the votes of online viewers on the VOD portal DAFilms.cz. The winning film in the Short Joy section is Blue Bed by Belgian director Lize Cuveele, an intimate insight into the relationship of a loving couple. The films can be watched for free on DAFilms.com until October 30. The APA World Excellence Award which annually recognises an outstanding contribution to film production was also presented. This year the award accorded by the Czech Audiovisual Producers´ Association and the Ji.hlava IDFF goes to Romanian producer Ada Solomon. Ada Solomon has produced over 60 titles such as I Do Not Care If We Go Down In History As Barbarians (Radu Jude, 2018, Grand Prix Crystal Globe in KV IFF), AFERIM! (Radu Jude, 2015, Silver Bear Berlin) and Child’s Pose (Calin Netzer, 2013, Golden Bear Berlin). She has worked with the most promising Romanian filmmakers as Cristian Nemescu, Ivana Mladenovic, Alexandru Solomon or Răzvan Rădulescu and was executive producer for Maren Ade’s Toni Erdmann, among others. The 26th Ji.hlava IDFF, the largest event of its kind in Central and Eastern Europe will continue until October 30, with 376 film titles on its programme.