The 25th edition of the annual Ji.hlava IDFF closed its doors. The festival programme took on a hybrid form: after the physical edition on October 25–30, the online part followed on November 1–14. The festival presented 338 films and over 100 discussions. There were 5,698 accredited visitors and guests this year, and 85,000 viewers watched the films: more than 30,000 visitors in cinemas and almost 55,000 online viewers. The Inspiration Forum discussions, which are still accessible online, have had over 25,000 views.

“We are very happy that, even in the pandemic times, the Ji.hlava IDFF attracted our audiences back to cinemas and showed how important culture and social gatherings for each of us are. We are glad to report that our safety measures have been efficient and generally complied with. The subsequent online part of the festival has confirmed that Ji.hlava can reach its audience both live and digitally. Thanks to the online part, the individual documentaries had several times more viewers. This is also a long-term effort of the festival team – to make the films available to the broadest possible audience,” said Festival Director Marek Hovorka.

This year’s Ji.hlava IDFF hosted 5,698 visitors and guests. Over 1,200 viewers and professionals attended the online part. Attendance of the live festival exceeded 30,000, and the Ji.hlava Online registered 32,000 film views. When converted by a factor of 1.7 (used by streaming services to determine the number of viewers), we arrive at nearly 55,000 online viewers.

Out of 338 screened films, 100 were shown in their world, international and European premiere. This year, films competed in 6 sections. Films were shown in 8 screening halls in Jihlava and in Třešť. The programme offered over 100 Q&As after screenings and over 25 discussions as part of the Inspiration Forum. The online part of the festival included 13 streamed evening screenings accompanied by an introduction and Q&As with the filmmakers. 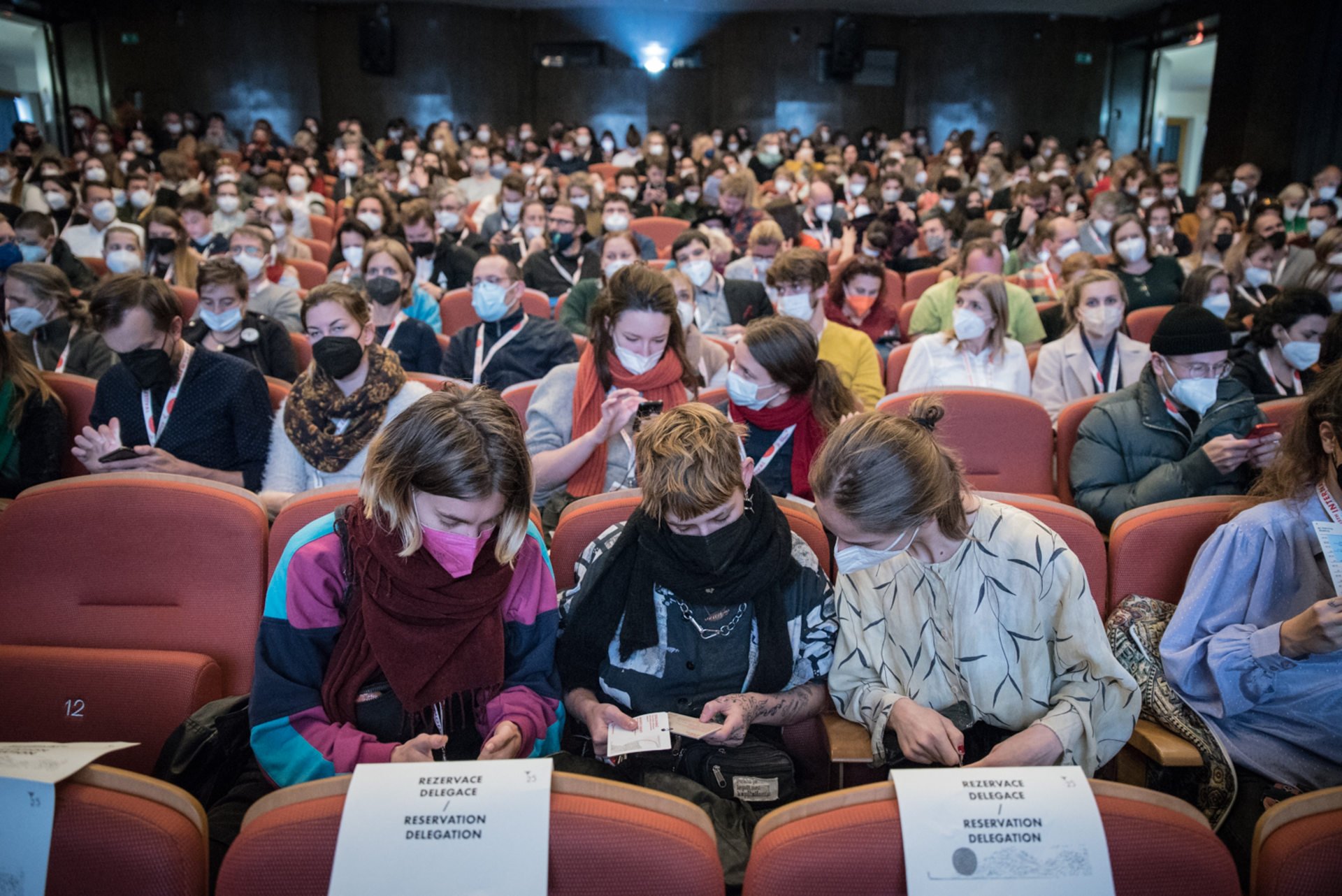 Greatest attention at the online Ji.hlava was dedicated to Out in Force made by Czech director Martin Mareček, a portrait of film critic Kamil Fila that reflects on the current conception of masculinity. Close behind came Brotherhood directed by Francesco Montagner. The film that tells a story about three boys growing up in an orthodox Muslim family also won the main prize in the Czech Joy section. Other award-winning films, such as the unconventional portrait of the last Soviet statesman, Mikhail Gorbachev, called Gorbachev. Heaven by Vitaly Mansky and the winner of the Opus Bonum section, Lines directed by Barbora Sliepková were also greatly popular. One of the five most viewed films was also the short Love, Dad by director Diana Cam Van Nguyen.

This year’s Inspiration Forum was also a success with the audience. Over the course of five days, 25 programmes and discussions held live in Jihlava or online brought nearly 80 guests from all over the world, including gender studies legend Judith Butler and Afghan filmmaker Sahraa Karimi. Among the guest speakers was one of the most notable contemporary ecological thinkers, David Abram, Canadian philosopher and writer Nick Srnicek or famous US psychiatrist Bruce D. Perry. The live Inspiration Forum discussions were attended by 2,500 visitors, and the online discussion space was visited by over 25,000 viewers. 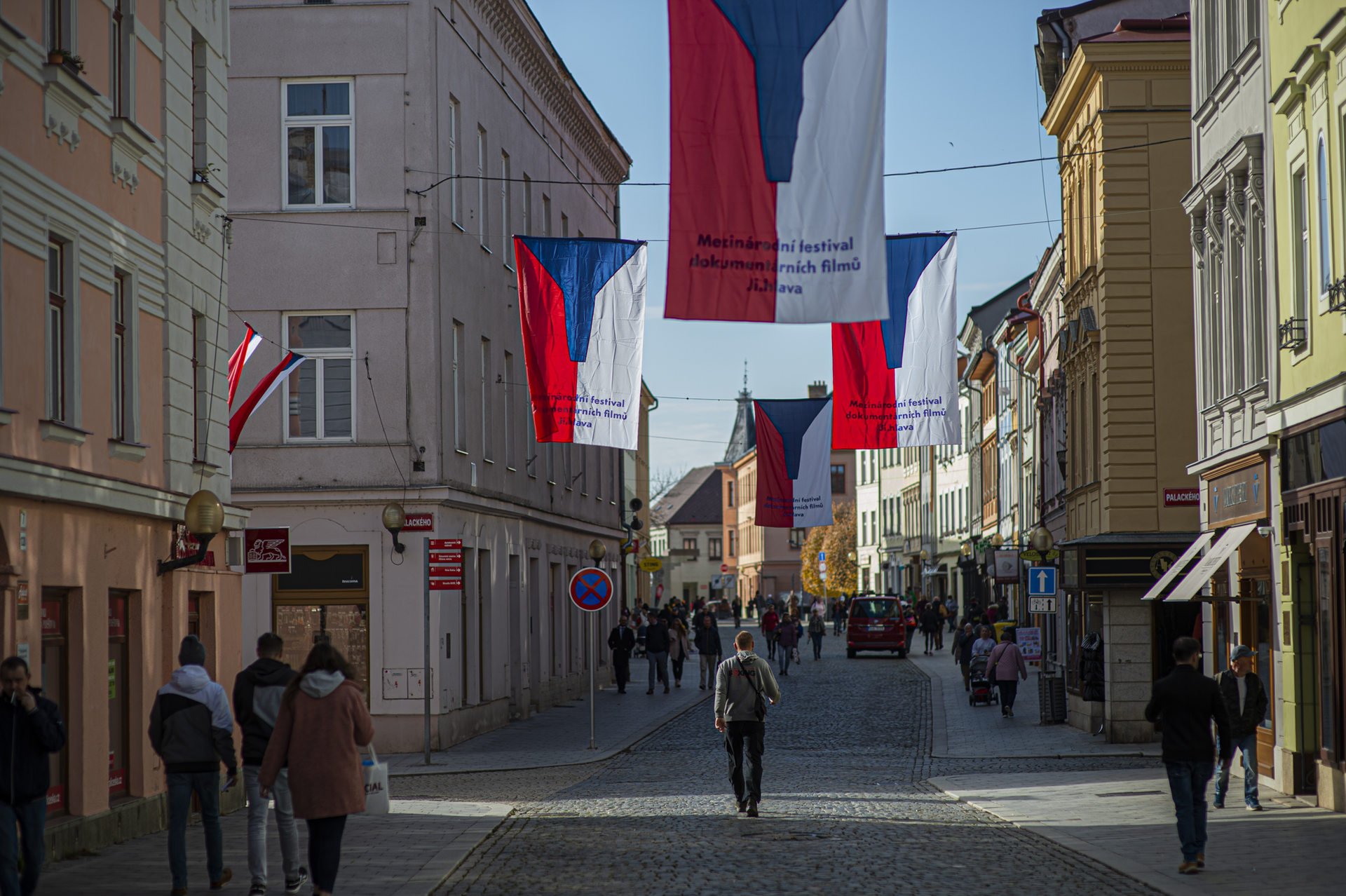 Over 420 children could become a part of the Ji.hlava for Kids programme. The six-day platform for kids offered 15 workshops, 6 performances, 5 concerts and other off-screen events.

This year’s Ji.hlava festival spot was created by Filipino director Khavn, and the festival prizes were designed by visual artist Federico Díaz.

Dozens of activities also took place as part of the Industry Programme, intended for film professionals. This year it reached more than 1,200 film professionals from around the world, 200 of whom joined the programme online. The festival hosted for example the educational workshop Emerging Producers, Festival Indentity and Conference Fascinations focusing on experimental film distribution. “Over 40 upcoming documentary films from Europe and the USA were presented as part of the industry programme at the first annual Ji.hlava New Visions Forum. Another novelty was the relocation of the industry programme to a new auditorium of the College of Polytechnics in Jihlava,” said Head of the Industry Programme Jarmila Outratová.

The 26th Ji.hlava International Documentary Film Festival will take place on October 25 – 30, 2022. More information at www.ji-hlava.com and on the festival’s Facebook and Instagram.

See the list of all awarded films of the 25th Ji.hlava IDFF here.

Selected US Docs will be introduced to European decision-makers this October // Deadline is May 15 One of the leading European documentary film festivals, the Czech Republic’s Ji.hlava International Documentary Film Festival, opens applications to the 2nd edition of the Ji.hlava New Visions Forum: U.S. DOCS addressing documentary filmmakers based in the USA. „The aim of this new initiative is to encourage and support U.S. and European documentary co-productions. In the European context, Ji.hlava has become the first platform, which effectively connected the U.S. documentary filmmakers with the potential co-producers, distributors, sales representatives and film festivals from Europe,“ says Marek Hovorka, director of Ji.hlava IDFF. The U.S. filmmakers can submit their feature and mid-length documentary films in development, production or postproduction until May 15. The platform is designed not only for documentary films but also diverse audiovisual formats such as fiction with documentary aspects, hybrid, experimental, short films, docu and web series, cinema expanded projects, games with documentary aspects and VR / AR / Live documentaries. “We primarily look for films made with creative artistic approach. They do not need to be shot in Europe but the expected impact of the film should reach beyond the U.S.A.”, says Jarmila Outratová, head of Ji.hlava’s Industry section. The projects will be selected in July 2022. Their presentation will take place online on October 25–30 during the 26th Ji.hlava IDFF, and will be made accessible to over 1,200 industry professionals and decision makers attending the event. The selected U.S. filmmakers will also be invited to tailor-made activities focusing on European funding and distribution system.   The Ji.hlava IDFF is a co-founding member of Doc Alliance network (CPH:DOX, Doclisboa, Docs Against Gravity FF, DOK Leipzig, FIDMarseille, Ji.hlava IDFF, Visions du Réel) and is behind the leading documentary VoD platform dafilms.com. Ji.hlava Industry programme includes acclaimed projects such as EMERGING PRODUCERS workshop or JI.HLAVA NEW VISIONS FORUM.

The Ji.hlava IDFF kicks of a special online event to support Ukraine. From Monday to Sunday, it will offer a selection of films that help to explain contexts of the post-Soviet space. The selection includes My Unknown Soldier by Ukrainian director Anna Kryvenko, Foundation Pit by Russian director Andrey Gryazev, and My Granny from Mars by Belarussian director Alexandr Mihalkovich. Each day until the end of the week one film will be available for free. “Documentary film is a key instrument that helps us get oriented in the world around,” says Marek Hovorka, director of the Ji.hlava IDFF. The films are available at DAFilms.com; each day, one of the included film titles will be offered for free. Monday, March 7 / My Granny from Mars Tuesday, March 8 / My Unknown Soldier Wednesday, March 9 / Town of Glory Thursday, March 10 / The Winter Garden's Story Friday, March 11 / Foundation Pit Saturday, March 12 / This Is War, Baby Sunday, March 13 / Broadway. Black Sea International Echoes of the 25th Ji.hlava International Documentary Film Festival will kick off on 8th March in New York. The programme loaded with films will then hit screens in Brussels, Ghent, Bucharest, and Paris. The Echoes are held in partnership with Czech Centers network and will have a hybrid form – held both live and online. Visitors of the live Ji.hlava Echoes can look forward to award-winning films of the Ji.hlava IDFF’s 25th edition, discussions with filmmakers and masterclasses “We are happy that the Echoes will allow us to bring Czech and foreign films that won awards in Ji.hlava to international audiences and interconnect filmmakers with local professionals and audiences,” says director of Ji.hlava IDFF, Marek Hovorka. Highlights of Echoes in New York The Bohemian National Hall at 73rd Street hosts the onsite screenings in New York. They include an awarded documentary Brotherhood (Wed, March 9) by young Italian director Francesco Montagner, which tells the tale of three brothers on the threshold of adulthood, grappling with their unsettling father-master. The audiences can look forward also to Gorbachev. Heaven (Tue, March 8) by Russian director Vitaly Mansky, which won a special mention for the best film about politics, and an animated documentary Love, Dad (Wed, March 9) by Diana Cam Van Nguyen about ties and gaps between a child and a parent. New York’s Echoes will be topped off with a „documentary anatomy of a mass murder“ Eyewitness (Thu, March 10) directed by Czech director Jiří Havelka who will be present to introduce his film and join Q&As. The screenings will be held free of charge, the full programme is here. The Czech Center New York is a co-organiser of the event. The showcase is accompanied by online screenings of Czech documentary films awarded at Ji.hlava IDFF’s previous years, free to watch at the territory of the United States via DAFilms.com. “The Ji.hlava Echoes in the USA are special for us also in relation to the Ji.hlava New Visions programme through which we help new U.S. creative documentaries find their co-producers in Europe. From the 1st April the U.S. authors will be invited to start submitting their documentary projects and present them to key documentary stakeholders in Europe during the 26th Ji.hlava IDFF in October this year,” adds Hovorka. Echoes of 25th Ji.hlava IDFF in New York: March 8 – 10, 2022 Dates of upcoming Echoes of Ji.hlava in March: France: March 19 – 26 Belgium: March 21 – 27 Romania: March 22 – 26 --- Ji.hlava IDFF stands with Ukraine. Action is needed. How to help: https://how-to-help-ukraine-now.super.site/donate